Over the last few years, social media marketing has really taken off. And it’s no wonder really… It’s a great way for businesses to get in front of their target audience (for free!) and build a strong brand personality.

This has never been more true than over the past few months. During lockdown we’ve all spent a lot more time indoors, meaning other forms of marketing (like out of home ads, for instance) became largely redundant. On the other hand, many people reported spending a lot more time on social media.

Innocent are one of our absolute favourite brands on social media. We just love their sense of humour! It makes for some quirky and creative content.

Their techniques aren’t exactly conventional, but their slightly more unusual approach does well to reflect their happy-go-lucky brand personality.

DAILY REMINDER OF WHAT DAY IT IS TODAY

It’s a Friday. We don’t know where that’s come from.

As you can tell, their content isn’t always directly related to what they do, but it gives their audience some kind of value. Whether that’s comedic value, or a sincere reminder of what day of the week it is during these crazy times, their audience enjoys the content they’re putting out – and that’s the key!

Our favourite part of their social media marketing is probably the times when they engage with their customers. They’re full of witty responses to the Tweets and comments they receive. Exhibit A…

It's been so long since we advertised smoothies on here that we're a bit worried you'll have forgotten what they are.

Here's a quick reminder: this is a smoothie. pic.twitter.com/8zvtwyjR2V

Engaging with customers shows them that they’re valued and keeps them interested in your brand. So don’t forget to do it!

Generally, it’s clear that Innocent’s social strategy is well thought out. It’s super entertaining and, perhaps most importantly, consistent. All their social channels link into a (very satisfying to see!) overarching strategy which tells the wider world what their brand is all about.

Of course we had to include Greggs in our top picks! Not only do we love the pasties (who doesn’t?!), but we love its humorous social content. It makes us laugh and does a brilliant job of expressing the brand’s personality.

In fact, back in the first ‘Fresh Picks’ blog we did, Henry said that Greggs’ vegan steak bake campaign really caught his eye. It was top class! There was a suspenseful video countdown to launch day on social media, and there was even a VIP (Very Important Pasty?) launch party in one of their Newcastle stores. Perks of being in the north east!

We’d also argue Greggs is the king of puns. ‘Punny’ content seems to be their social media team’s speciality (sorry, we had to!).

You could read our new safety measures… OR, you could sing them (if you can guess the tune) ? pic.twitter.com/3mPnhj7nw0

Hilarious, if you ask us! It certainly managed to capture our interest (and test our musical knowledge a little!).

Much like Innocent, Greggs also engages with its customers a lot on social media, although with their own approach. On Twitter, it’s more retweeting things, asking followers questions, and making memes. Instagram is full of customer pics of their food. Surely nothing beats getting recognised by the Greggs marketing team… That’s a big brag, right?! Either way, you can follow Greggs on Insta here.

Burger King is often praised for the creativity of its advertising generally, so it’s been featured in our ‘In the Loop’ blog series a few times.

cow farts & burps are no laughing matter. they release methane, contributing to climate change. that’s why we’re working to change our cows’ diet by adding lemongrass to reduce their emissions by approximately 33%. learn about our ongoing study: https://t.co/kPCXpjfbGL #CowsMenu pic.twitter.com/DnmF8gVVL0

It’s definitely a bit weird sometimes, but succeeds in grabbing the attention of their target audience, which is the goal!

BK’s socials pay attention to all the latest trends too. For instance, their US Twitter page only types in lowercase letters (very fashionable right now) and they hopped on the ‘I know a spot’ trend. So you could say the brand succeeds at being relatable to its audience which means they’re onto a winner!

In case you’re not familiar, the ‘I know a spot’ trend going round on Twitter at the moment is a way of framing jokes, usually featuring an ironic person/place combo.

Ok, bear with us on this one. We know Tesco Mobile isn’t the most conventionally exciting brand, but its social media marketing can be pretty damn cool.

People love to rant and complain on social media. In fact, the primary purpose of Tesco Mobile’s socials is to deal with queries from customers. So to capitalise on this, Tesco Mobile has turned some of its funnier (and less serious) complaints into a social media marketing campaign.

Only about 4.7 million people, about the same odds as you getting a date this weekend ?

Controversial, we know! But, it has meant that it’s gone viral a few times! You might remember seeing this sassy response… 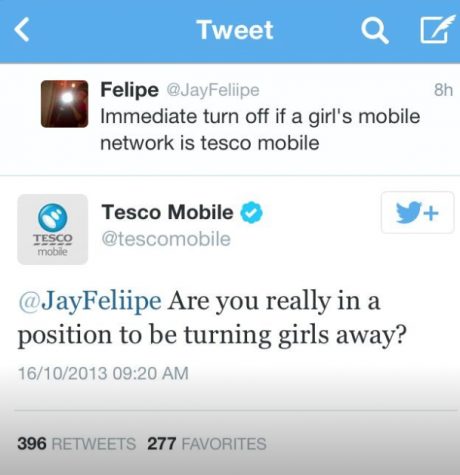 t might not be everyone’s cup of tea, but it’s tailored towards the target audience. Plus, it’s very well-suited to the general humour of Twitter. It’s important to have a good understanding of the type of content that’s appropriate for each platform.

Arguably, going ‘viral’ is one of the best forms of advertising, so it’s not a bad thing for Tesco Mobile to aim for. Firstly, a viral Tweet has a lot of reach. Secondly, it’s consumer driven, which marks the start of a much easier and more natural customer-brand relationship.

Even though we very much enjoy how all of these brands do their social media marketing, we appreciate each of them for different reasons. The right social media strategy will differ from company to company as it’s all about building your own brand’s personality and tailoring content to your core messages.

But regardless, we hope you found these examples entertaining. We certainly do!

Spice up your own social media marketing

We’re always up for a chat about how you can improve your own social media marketing. Get in touch with one of our friendly team to see how we can help.

Inspiring Campaigns: Art for the Street and Finding Places to Meet