In the Loop: June Marketing Round-Up

This year really is flying by, isn’t it?! We seriously can’t believe we’re over half-way through the year already. But here we are, at the beginning of July(!), which means it’s time for the next instalment of our ‘In the Loop’ blog series.

Facebook has made it easy to clean up your past

At the beginning of June, Facebook released a feature for those of us who created our Facebook profiles when we were still in school and had no idea what social media even was (guilty!). You can now bulk delete older posts with the ‘Manage Activity’ feature. 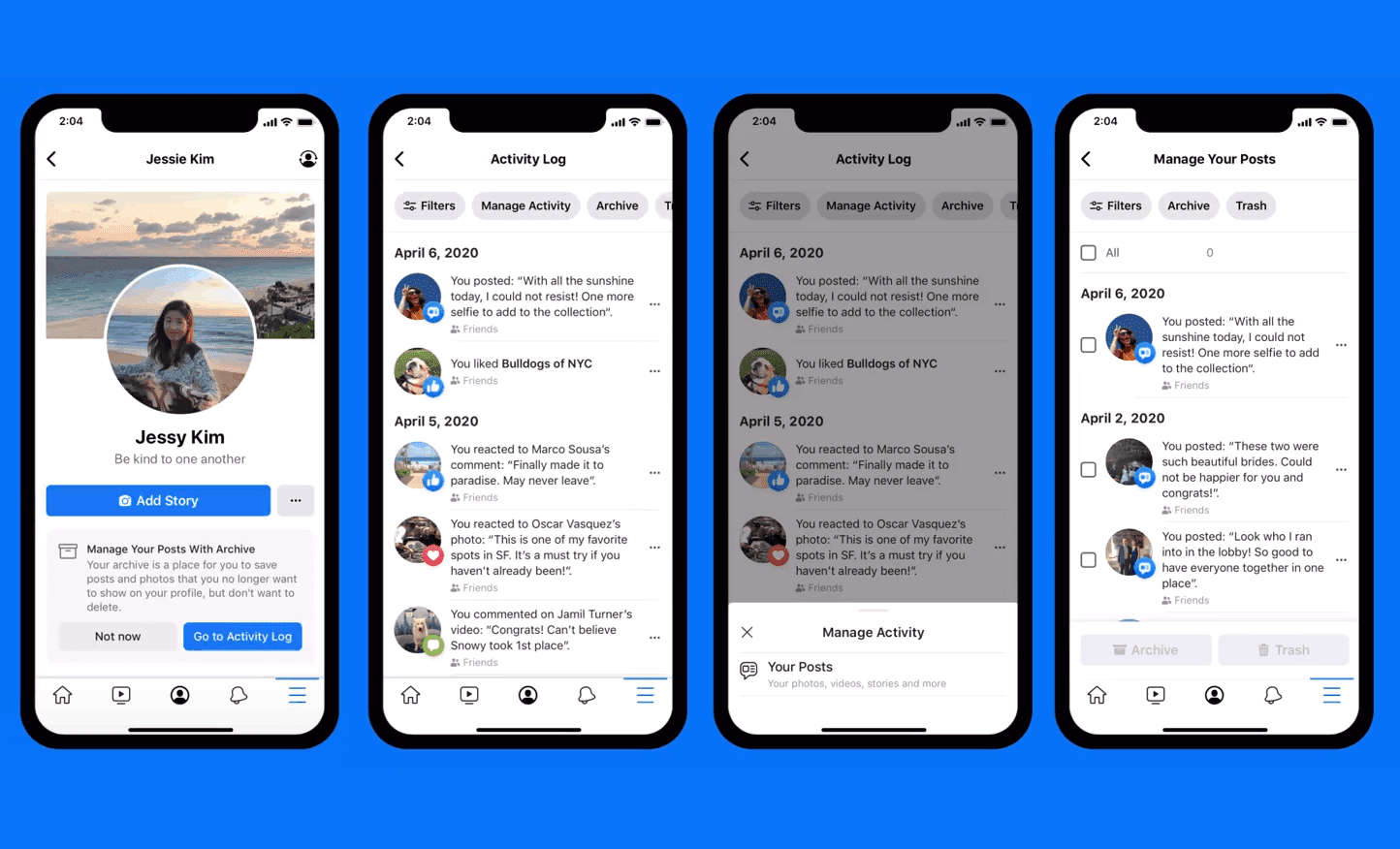 The feature uses filters that let you to sort through your previous posts to delete or archive it on mass. Thank youuu Facebook!

The #BlackLivesMatter movement relies heavily on social media to spread its message. Twitter in particular has been a key platform for the movement because of its immediacy in spreading unfiltered news.

According to Apptopia, Twitter broke its daily app download record on Wednesday 3rd June with a whopping 677,000 downloads – 140,000 of them in the US. And as you can see from the graph below, it’s a huge spike. 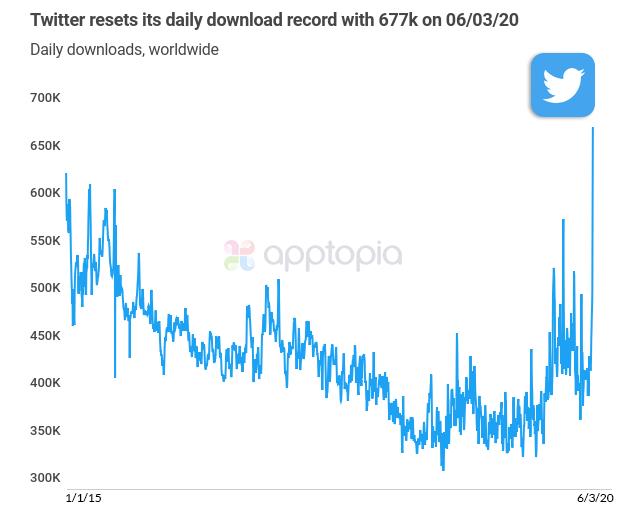 It’s thought that the #BLM movement was the main contributor to this. Twitter also broke its own record for daily active users in the US just a few days later as 40 million(!) people logged in to check out the #BLM coverage and join the conversation.

Have you been using Twitter more to keep up with recent events?

Nike (along with countless other brands) took a stand on racism

Brands responded in various ways to the #BlackLivesMatter movement, but Nike’s was one of the bolder ones that we saw.

Their brand is known for encouraging its customers to get out there and ‘just do it’. But this month they flipped their messaging to address the racism that #BlackLivesMatter brought to the forefront, saying instead ‘For once, Don’t Do It.’

The text-only video was posted across all their social media accounts, urging people to take notice and be part of the change.

Since this post Nike’s social channels have remained almost untouched, with the exception of a post celebrating the LGBTQIA+ community.

Instead of issuing a statement of support, on Juneteenth (the annual holiday to remember the liberation of US slaves) Twitter turned several real #BlackLivesMatter Tweets into billboards. 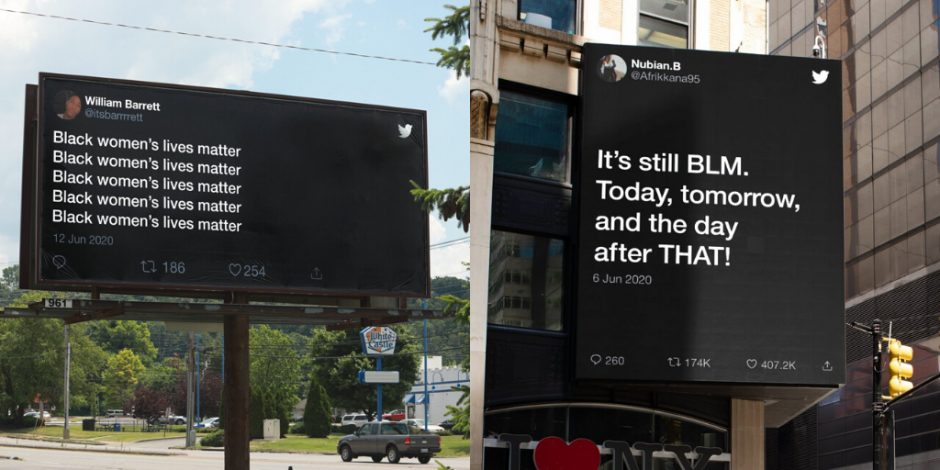 The billboards appeared around the whole of the US. They were placed in cities that had received a lot of attention for their highly attended and long-lasting protests against police violence including Chicago, Minneapolis, NYC, LA and Atlanta.

Twitter’s Global Director of Culture and Community (@GodIsRivera) said “We didn’t want to show up in these places as Twitter; we wanted to amplify the perspectives and thoughts of people who are sharing these intense feelings about what’s happening in the world today. And we wanted them to show up in their own words.”

Instagram has been working on implementing identity verification on their platform after announcing in May that they would be requiring identity verification of all high-reach profiles. But now it’s rumoured that it will be rolled out to all accounts. You’ll confirm your identity by uploading a photo ID “so Instagram knows this account belongs to you”.  Apparently your ID won’t even be visible on Instagram (let’s hope not eh!) and they’ll only store it for 30 days. According to Steven Bartlett, CEO and Founder at Social Chain, people with confirmed identities will be less likely to engage with trolling and cyberbullying. He also thinks it’ll discourage people from writing, or knowingly sharing fake news. Whilst most people acknowledge that it’s a significant step towards tackling online abuse and fake news, there’s also a lot of scepticism. The Facebook data scandal of 2018 has been brought up consistently, raising concerns of how Instagram (owned by Facebook) will handle this extra personal data. Others see it as a breach of privacy and some have pointed out just how easy it is to create a fake ID using tools like Photoshop.

Katie Hopkins has previously been suspended from Twitter for limited periods of time, but this time she’s been banished from the site for good. All after breaking Twitter’s rules on ‘abuse and hateful conduct’. In some of her final Tweets, she got into a feud with Marcus Rashford after he lobbied for an extension of the free school meals scheme. She also criticised the #BlackLivesMatter movement. After the ban, her name was the top trending topic in the UK, with people debating the ethics behind it. Some say it’s a violation of freedom of speech and others argued that she was misusing the platform to create hatred and fear.

Audio Tweets are now a thing!

Twitter users are now able record up to 140 seconds of audio to add a ‘human touch’ to their Tweets. If you exceed this time limit, the app creates a new recording and strings them together into a thread of voice Tweets. Handy!

The audio composer is right next to the photo icon so it’s nice and easy for you to inject some personality and creativity into your Tweets. 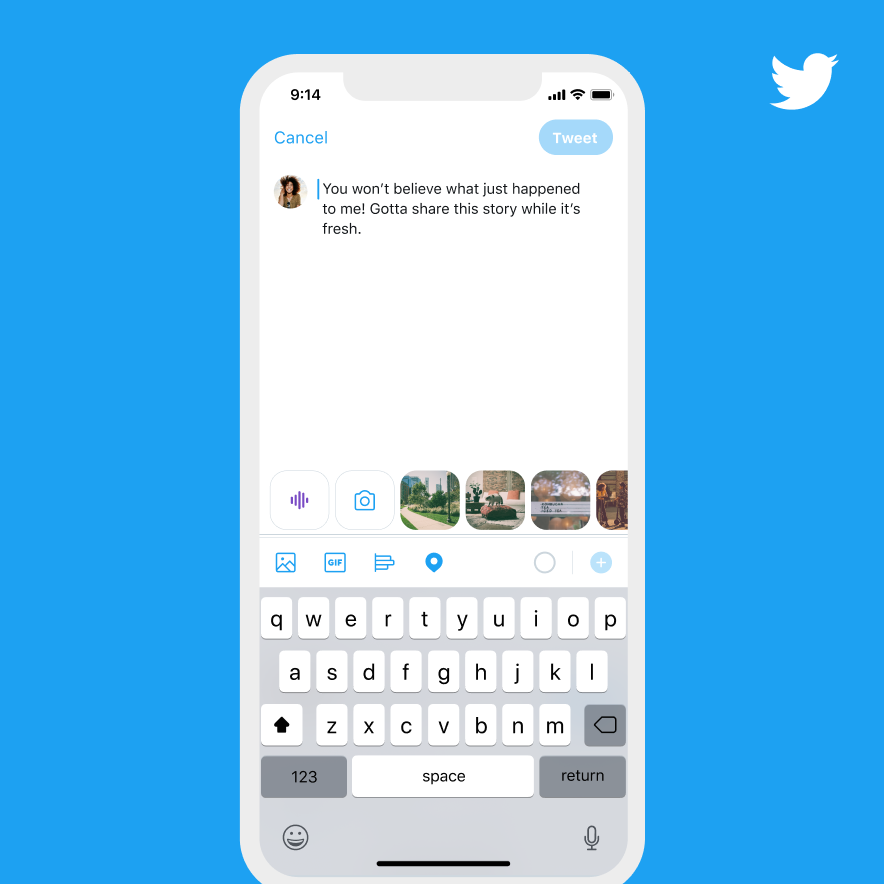 And this is how your audio tweet will look once published… 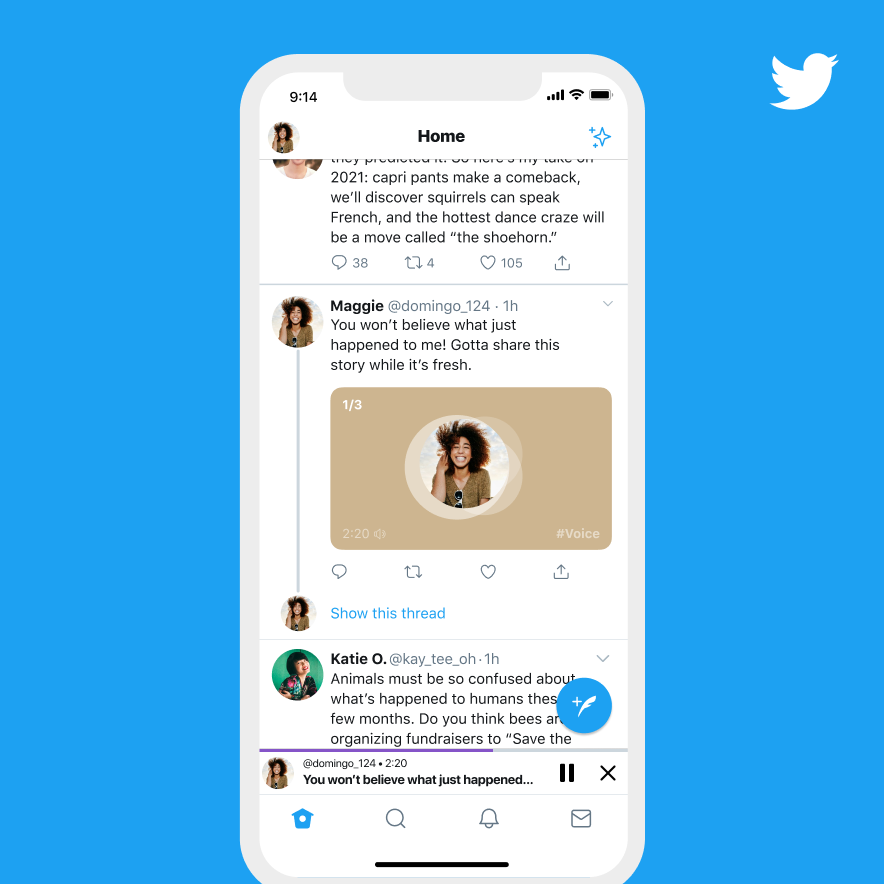 To listen to someone’s audio you just tap the Tweet. And if you’re using an iPhone, the audio keeps playing as you scroll.

We think it’s a pretty cool addition that could encourage more engagement on Twitter, but we do hope to see captions added in future to make this new feature accessible to everyone. 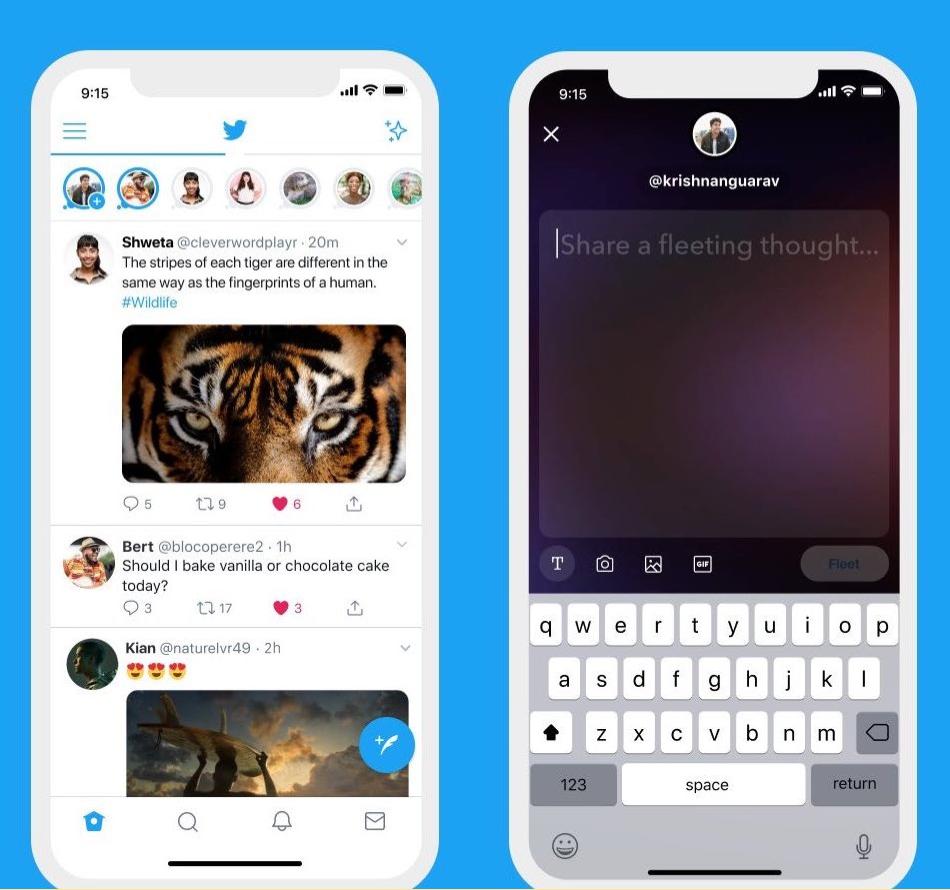 Twitter has been slow to adopt this type of feature… Will you be using it?

Preventing the spread of misinformation

Controversially, Twitter is testing a new feature to help prevent the spread of misinformation. It acknowledges that ‘sharing an article can spark conversation’, so when retweeting an article that you haven’t opened, the new prompt will ask you if you’d like to open the article first. Again, people have mixed opinions on the feature. Some argue that it restricts freedom of speech, whilst others think it’ll make people consider what they’re posting.

Facebook has also released a feature that warns users about news articles that are more than 90 days old.

According to Facebook, the move is to “ensure people have the context they need to make informed decisions about what to share.”

It was met with very similar comments to Twitter’s prompting feature. Which do you think will be more effective?

You may have noticed recently that there’s a new way to react to updates on LinkedIn. At the end of June, LinkedIn added the “Support” reaction.

The feature helps users “give and get support from their community”, according to LinkedIn.

Have you used the Support reaction yet?

Earlier this month, WhatsApp announced a new feature. It will enable people to pay friends or businesses for free through the platform. 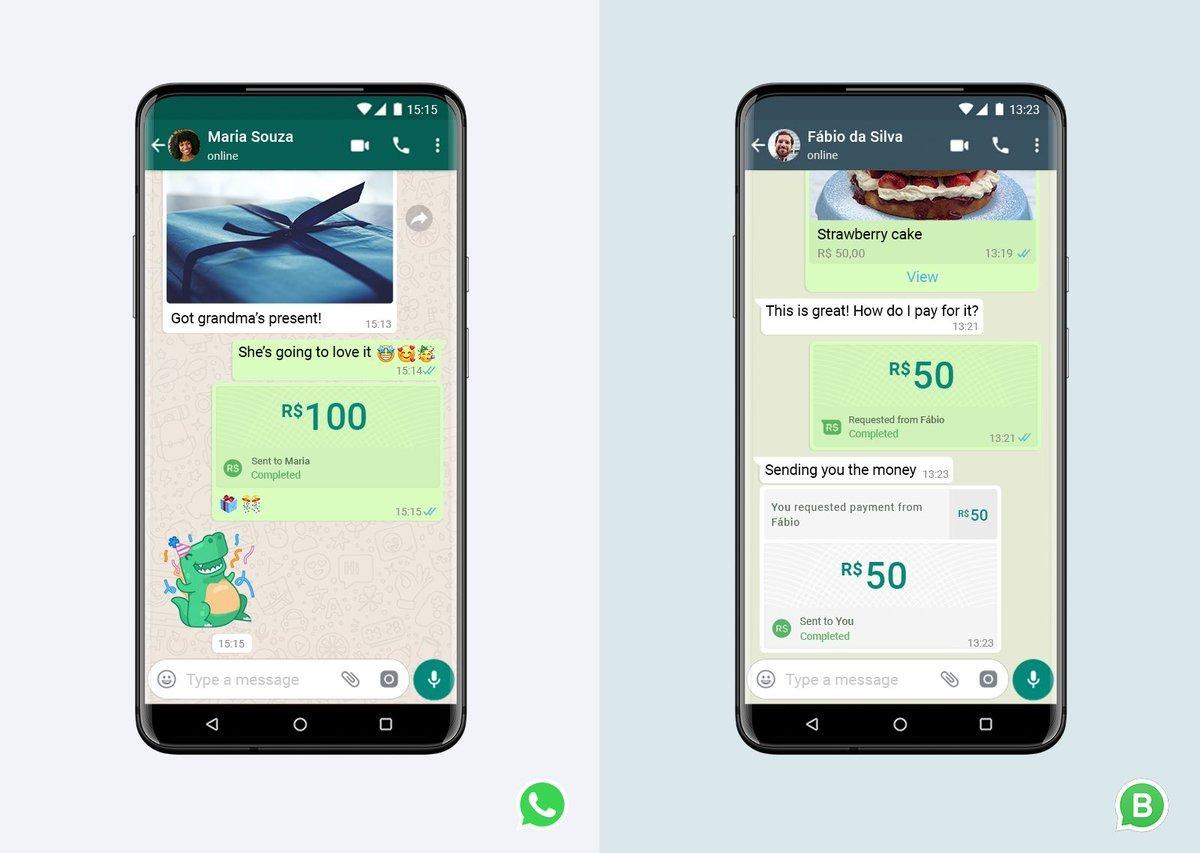 It’s launching in Brazil first, although it probably won’t be long until WhatsApp rolls it out globally.

Steven Bartlett said, “it marks the start of a major shift in ‘social commerce’. He claims that soon “bills, shopping and other payments will happen seamlessly within social apps.”

What Previous Recessions Taught us about Marketing