Personalised Ads: The Marmite of Marketing

Personalised ads have had a bad rap. But love them or hate them, it's good to learn about the latest trends as they could add value to your marketing.

Personalised ads. We’ve all seen them! Although we may not always realise they’re personalised… Seen an advert for trainers on Facebook after you’ve just been looking at them online? Coincidence? Probably not!

Either way, digital ads have gained a lot of popularity with businesses and marketeers alike over the past couple of years. And it appears to have divided opinion into a kind of Marmite situation, if you will! It seems you either love them or you hate them.

What are personalised ads?

In case you don’t have a clue what we’re talking about, personalised ads are a digital marketing technique used by marketers in an attempt to stand out in saturated markets.

These days we’re exposed to so many adverts that we almost stop paying attention. So personalisation aims to grab attention by tailoring them to your personal interests.

How do they work?

Ad platforms use artificial intelligence (AI) and can be adapted depending on things like your location and the weather. And yes, it can be seen as a little bit creepy…

But the controversial part is how the data needed to do this is collected. Essentially, ad platforms use advanced tracking that can tailor ads based on your behaviour and through your IP address. Some claim there’s no way this data can be used ethically.

Is it the future?

Well, many marketers seem to think so. In fact, personalisation was the US Association of National Advertisers’ 2019 marketing word of the year and Digital Doughnut have said that in terms of advertising, “the era of individualisation is upon us.”

Plus, Sav Khetan, the Vice President of Tealium (a company that sells a customer data platform that uses personalisation) released a study that suggested that greater personalisation of advertisements will provide greater value. The graph below summarises his findings. 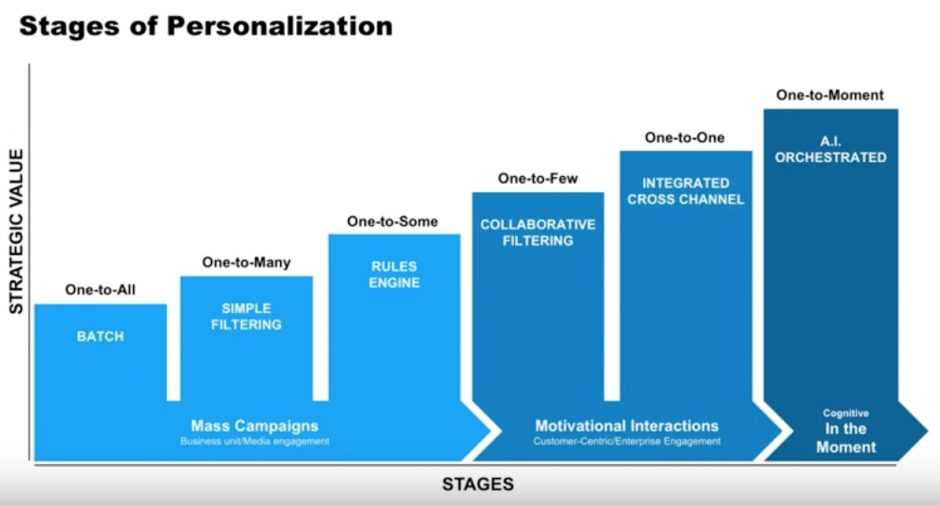 And a panel discussion of marketers referenced in The Drum also suggested they would rather adopt a personalised marketing strategy for their business, but they found it challenging to do it in an efficient way, which was the only thing that put them off.

But according to a recent survey by Kantar, only 45% of people thought that ads tailored to them were more interesting than digital adverts that weren’t personalised. A big percentage, but not quite the majority.

Despite the perceived benefits, a recent Kantar survey found over half of consumers (54%) object to being targeted based on their previous online activity.

And it doesn’t stop there. Forbes also claimed that the majority of consumers believe using data to personalise adverts is unethical. And research by fraud and security company RSA suggested that less than half (48%) of consumers believe their data can be used ethically for marketing purposes.

These opinions were echoed in the General Data Protection Regulation (GDPR) changes that came about in May 2018.

In light of advancements in technology, the new GDPR rules now mean individuals have a lot more control over their data and how it’s used – so in theory advertisers shouldn’t be invading peoples’ privacy (without permission first at least!).

So, will we see more personalised advertising in 2020?

Really, it’s hard to say. Marketing experts (who, funnily enough, have a vested interest!) seem to think it’s going to be the next big thing to help companies stand out. But surveys consistently suggest more people are worried about how personalised ads might infringe on privacy than those that like them.

In a recent LinkedIn post, Steven Bartlett suggested that 32% of marketers aren’t confident they’re hitting the right audiences when they’re using personalised ads as data becomes more granular. He also quotes a Gartner study which suggests 80% of marketers who’ve invested in personalisation will abandon their efforts due to a lack of return on investment (ROI). We have to say, we don’t think that sounds great for the future of personalisation!

What do you think? Is personalised marketing the future of advertising? Does it bother you that your online behaviour could be analysed for marketing purposes? We’d love to know your thoughts!