Quirky Marketing Campaigns: Our Favourites of 2020 So Far

We may only be a month or so into 2020 but there have been a number of high-profile marketing campaigns and articles that have caught our eye here at Vida. Each of our team have picked their fave campaign so far this year, we hope you enjoy reading about them!

We may only be a month or so into 2020 but there have been a number of high-profile marketing campaigns and articles that have caught our eye here at Vida.

Each of our team has picked their fave campaign so far this year, we hope you enjoy reading about them!

Of course, being from Newcastle we bloomin’ love Greggs! So we were eager to find out what the fuss was about with their recent addition, the Vegan Steak Bake.

As ever with Greggs their new product launch was innovative and razor-sharp. Following on from the success of their vegan sausage roll, the Vegan Steak Bake was launched with an exclusive VIP (Very Important Pasty!?) event in which a Newcastle branch of Greggs was transformed into a nightclub. The launch coincided with a slick marketing video.

We were impressed with the campaign and obviously had to go and give the pasty a go too. Delicious!

Ben & Jerry’s CEO Matthew McCarthy has been speaking to Marketing Week about activism in business and “trying to encourage each other to be different.”

It just got me thinking about a lot of the conversations we have with potential clients. People have often seen something a competitor is doing and want to do the same thing, but better. But what if you just focused on what you’re doing? What if you ignored everyone else and thought outside the box a little bit? Or inside your own box!?

As McCarthy said, “I want us to stand out because of what we do not because of what other people don’t do.”  This means that Ben & Jerry’s don’t focus too much on market research, but instead allow their people to “come up with wacky concoctions that make people go ‘wow I didn’t think that was going to work’”.

So what is it that makes your business special? And what can you do to communicate that to the people you want to work with? Just some food (or ice cream!) for thought… 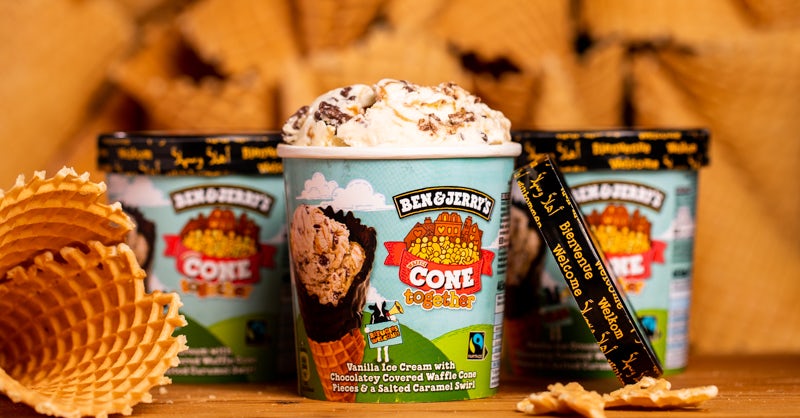 A new marketing campaign using Instagram stories launched recently to promote the Samsung Galaxy Note 10 and Note 10 + 5G. The story takes you on a Bandersnatch-style chase where you can choose a different path (using different Instagram accounts) to create your own outcome and if you pick the right path, there’s a special feature to be unlocked at the end!

It was created by Social Chain, and Founder Steven Bartlett said on his LinkedIn post, “we decided to take a disruptive, unconventional and unexpected, typically Social Chain, approach.”

I think it’s an interesting approach given how different and innovative it is to use the interactive element but I liked the use of Instagram stories as the main feature as opposed to other, perhaps more conventional social/digital channels.

You can play the game over on Samsung’s Instagram page – it’s on their highlights!

The Last Mile campaign bids farewell to Volkswagen’s most popular and significant car, the Beetle, as it commits to its next chapter of going fully electric.

The short animated video produced by ad agency Johannes Leonardo, is really poignant and makes reference to some of the previous advertising campaigns over the years.  I really like the illustrative style of the campaign, and think it helps tell the brand story in an engaging way.

The subtle references to characters such as Andy Warhol, who created artwork in tribute, and Kevin Bacon, who famously drove the car in Footloose are nice additional touches to demonstrate its role within popular culture.

Give your own marketing a bit of pizzazz

If you couldn’t already tell from this blog, we bloomin’ love marketing campaigns that bring something new and different.

Our friendly team are a mix of marketing, design and web development nerds… So if you’ve got an idea and want to chat about bringing it to life, drop us an email to hello@vidacreative.co.uk or give us a call on 0191 691 1293.

Oh, and click here to check out some of our work.

In the Loop: January Marketing Round-Up